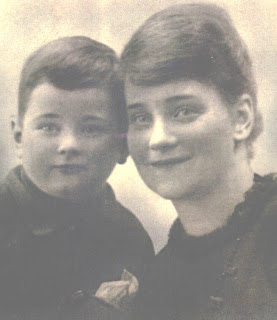 Although my dad was born in England, he came to Australia when he was just 11 years old, but being agile and sporty, he quickly assimilated - it was either that or find himself on the outer.  And he was the first and only member of his Tucker family to join the Australian army.

Robert Sydney George (Bob) Tucker was born just before the First World War, on 30 June 1914, the third child and only son of Sydney George Tucker and Edith Annie Reed of Southampton. The following year, his father, a former territorial, joined the British Army and by 1916  was serving in France.  My first post in 2011 described his dreadful war and my father's only memory of his father who died when Bob was not yet five years old.

Left without a war pension after her husband's suicide, Robert's mother struggled to keep the family together, but by 1920, his sisters Jessie and Cecily were in care in London, and whilst he remained with his mother, his aunts had to come to the rescue and provide warm clothing and extra love. A complicating factor was that Edith and her children no longer had the security of rent free accommodation at the comfortable Tucker family home at 67-69 Waterloo Rd, Fremantle, a suburb of Southampton.   It is unclear why, but I suspect her landlord and father-in-law's young second wife had something to do with it.  She certainly made sure her elderly husband changed his will, and Edith Annie no longer had the promise of the family business.

In 1923, Robert's sisters Jessie and Cecily Tucker, just 12 and 14, were encouraged by Barnardo's Homes to emigrate to Australia and work as domestic servants, and they were given permission to do so by their mother. But she missed them and the girls pleaded for their mother and young brother to migrate as well because they loved their new climate.  Edith and Robert spent six months living with her sister Alice Bayford in Shepherds Bush, London preparing for the trip. He enjoyed the company of his cousin Norman Bayford who was just two years older.

So by 1925, young Robert - soon to be known as Bob - was admitted to Barnardo's for a day, and given a free passage to Sydney, with his mother accompanying a group of boys bound for Western Australia.  Edith found it difficult to obtain work and accommodation with young Robert in tow.

So, within a few months, Bob was admitted to the Church of England Homes at Carlingford, where he thrived, mainly due to a wonderful   superintendent and matron, Mr & Mrs Hill, English quakers who championed each boy and recognised their interests and talents.

Although his young world was rocked by the sudden death at 19 of his sister Jessie, he loved the outdoor life and the sporting opportunities - and continued these until he went to war in 1941.  At 15, having completed his intermediate certificate at Carlingford Rural School, he obtained a job at Rosen's nursery just opposite the Homes and lived in the working boys' hostel, a two storey house on the corner of Moseley Lane.

Later Bob went to live with his mother at Homebush, and by 1940 had put down a deposit on a new two bedroom house in Buller Street, North Parramatta.  His mother lived there and paid the rates and utilities and Bob paid the mortgage from his army pay.

Twenty odd years later, this property was useful when my father changed jobs and lost accommodation with a peppercorn rent.

Bob was knocked back on medical grounds (poor eyesight) when he tried to enlist in 1939, but by
1941 the Army was desperate so off he went to war.  He trained as a signaller and was sent to New Guinea - Lae, Milne Bay and later the Kokoda Trail in 42-43 - followed by another mission to Bougainville in 1945.  Whilst there, he undertook a courageous act, crawling to fix a broken cable right near the Japanese camp.  His close mate Hugh Belling told us this in 2010 - not the sort of thing my dad mentioned.  His senior officers were grateful, although it was totally against the rules to undertake such dangerous activities on one's own.

During the war, whilst on leave, his sister Cecily introduced Bob to her friend Freda Smith, and before long they were engaged.  Bob returned to his prewar job at the citrus nursery and received a promotion to overseer with a house on site.

In 1952 the nursery, having been sold by Rosens to Andersons Seeds, changed hands again, this time being purchased by the Church of England Homes.
We were fortunate to stay where we were because Bob became the farm manager, looking after 45 acres from Pennant Hills Rd to the creek at the dip of what is now Carlingford Rd, and bounded by Orchard Rd.

Every Sunday in the 50s, we went to Granny's place at North Parramatta for high tea - cakes, cream buns and biscuits; later when Granny moved to a nursing home, we took her for a drive, usually to places where we children could play.  Mum enjoyed an afternoon to herself.

Bob had qualified as a horticulturalist in the late 40s, and followed this up by studying landscape gardening.  At weekends he took on small contracts working at residences in Pennant Hills and elsewhere.  He and Freda also cut and budded rose cuttings and our kitchen table was often taken over by these activities on weekday nights.  In those days, most women did not work outside the home.

In 1959 Bob received a small legacy from one of his English aunts, enough to purchase a new car, so with a station waggon and trailer, we travelled throughout NSW and Victoria during the school holidays.  Bob loved visiting Freda's relations in country towns and his army mate Hugh on his farm outside Gunnedah but was not keen on the dry, dusty countryside that Freda loved.

Big changes came in 1961 when Bob resigned from the Church of England Homes.  The 45 acres on the north side of Pennant Hills Rd had been sold to Lendlease for a shopping centre (Carllingford Court) and housing in 1960.  Our house, Fernhill was moved across Pennant Hills Rd to Moseley Lane, and we spent six months living in the coach house at Havilah, the home for preschoolers, situated opposite Orchard Rd.


The Homes now expected him to manage the dairy as well as a smaller vegetable farm on the remaining Boys Home property..  However, dairy farming didn't interest him.   So he went to work at Rumseys Seeds, later Yates, and managed the trial grounds at Baulkham Hills.  No longer having a house with the job, the family moved into the Buller Street property and within six months had sold that and purchased a rambling "gerry-built" house in Linton Street, Baulkham Hills.

During the seventies, Yates moved its operations to the other side of Sydney, so Bob took a job as Garden manager at the Anglican Retirement Villages (usually known as Mowll Village) at Castle Hill. Over the years, the work and number of garden staff expanded, but Bob was still expected to supply his own vehicle and trailer.  Contractors undertake this work now.  He finally retired in 1981 and spent his time gardening at home and pruning the neighbours' roses.

By 1988, Bob had convinced a somewhat reluctant Freda to move into the village where he'd been the head gardener - Mowll Village - where they were actively involved in activities both inside the village and elsewhere.  Bob's hearing was very poor and he joined SSSH - Self Help for the Hard of Hearing.  In 1989 he participated in the annual city ANZAC march for the first time, and renewed friendships from his army days.  He started opening up about the war and his experiences in New Guinea from this time on.

For 20 years post retirement, Bob and Freda spent much time with their three grandchildren and pursued their many hobbies.  Bob played his electronic organ and went to organ recitals.   He sometimes contentedly stayed at home when Freda travelled, but joined her when the focus of the trip was staying with friends and relatives.  He volunteered for meals on wheels with his younger daughter Kath right up till his late 80s.

Freda's health became a concern in the mid 90s, and he spent three years visiting her every day at the village nursing home.  Not so long after her death in 2004, he had a second stroke, leaving him unable to bear weight on his legs, but with his mind as active as ever.  But having already exchanged his retirement village for low care residential care at Donington Court at ARV, he was now reliant on a wheelchair and the ageing facility had not been designed with wheelchairs in mind.  So he spent the next five years at the Donald Coburn
Centre, where Freda had lived, passing away on 7 July 2011 at the age of 97.  His first great grandchild had been born just five weeks earlier.

Due to many circumstances and ill-timing, Bob never returned to England, unlike his sister Cecily who visited her homeland in the 1980s.

He considered himself a proud Australian, even wanting a new flag and a republic.

However he remained ambivalent thoughout the cricket series, whenever the Ashes was being decided. 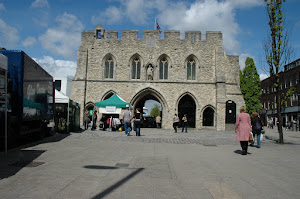